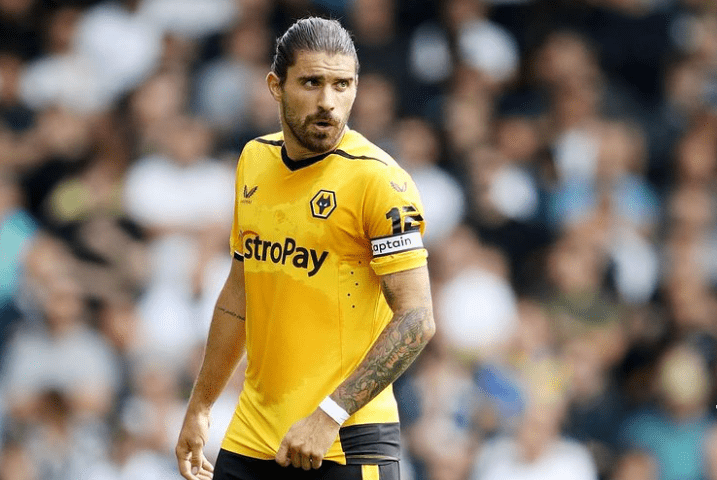 Ruben Neves is married to his wife, Debora Lourenco. The couple shares three kids in the family, two sons and a daughter. Neves is an essential player for the Portugal National side in the Fifa World Cup 2022. He was recently named in the 26 men’s squad traveling to Qatar. Before the tournament, Neves is also expected to play the friendly against Nigeria on Friday, November 18, 2022.

Regarding the midfielder, he is the captain of the Premier League club Wolverhampton Wanderers. He started his career with the FC Porto at 17 and was signed by the Wolves for a reported £15.8 million in 2017.

Since moving to the Wolves, Neves has become a leader and improved as a defensive midfielder. He has played more than 200 times and won the EFL Championship in his first campaign.

Neves played for Portugal’s youth national teams in more than 60 games. At 18, he made his senior international debut for Portugal in 2015. He also travelled to the 2020 and 2022 World Cups with the Portuguese team.

With his progressing career, Neves has also received sufficient support from his wife and children. He currently lives in his new Wolverhampton house. The midfielder also celebrated his eighth anniversary this year.

Ruben Neves and Debora Lourenco have been married for the last eight years. They recently celebrated their anniversary on August 14.

Neves was only 21 when he decided to marry his lady love. He was setting his eye on The Championship with the Wolves and had more romantic things in his mind during his team’s promotion party. It occurred nine months after the couple’s daughter was born in August, shortly after he joined the Wolves from FC Porto of Portugal.

The same day, Neves proposed to his girlfriend in Los Angeles and posted a tweet confirming his engagement with Lourenco. He shared a photo of himself and his new fiancee on Twitter while sailing in the beautiful scenery and sipping champagne.

Lourenco also shared a picture of them holding hands during their marriage to celebrate the anniversary. She also captioned in Portuguese, “Há 8 anos a caminhar de mãos dadas,” which means, “8 years walking hand in hand.” In the same picture, Neves has commented: “Here’s to many more.”

On May 29, 2022, the Wolverhampton captain also expressed his love via an Instagram post. He said: “8 years ago today, we started this wonderful adventure together. May we continue like this, forever.”

Besides serving as a mom to Neves’ children, Debora Lourenco is flourishing in her professional career. She is a glamorous fashion model.

For those who don’t know about Ruben Neves, he was born on March 13, 1997, to his parents, Mr and Mrs José Neves, in the Portuguese town of Mozelos. He was raised in a modest middle-class home with his younger sister, Vanessa Neves. He and Fabio Vieira both come from the Santa Maria da Feira family.

Ruben was a big fan of FC Porto and was lucky enough to get the jerseys of his dream club for free, as his parents had a retail sporting goods business.

Debora Lourenco is 31 years old. She was born on May 3, 1991, making her six years younger than her footballer husband.

Lourenco was born under the sign of Taurus, which denotes that she is very composed and logical. People born under the Taurus sign are typically very patient and stubborn. Also, she is Portuguese, like her husband.

Lourenco is Portuguese and met Neves in 2014 when the midfielder was still playing for FC Porto. Even though Neves was only 17, they immediately fell in love.

The main reason for Debora Lourenco’s fame is that she has been Ruben Neves, a midfielder for the Wolves, for a very long time. In addition, Debora is her fiance’s biggest supporter and a devoted mother who takes excellent care of her kids.

She usually shares a lot about her children on her Instagram handle @deboralourenco23, which has amassed 26.6 thousand followers.

The beautiful wife of Neves recently celebrated Halloween with her children. All her kids were dressed in a scary outfits, while Ruben was seen in the Chucky outfit. On October 29, 2022, she also attended the last game of the Wolves before the World Cup 2022 in Qatar.

Debora still needs to provide information about her job. She is likely a stay-at-home mother working full-time to care for her wonderful kids and home. She does a terrific job at home and cares a lot about her young children.

Meanwhile, her husband, Ruben Neves, is at the peak of his career playing in the English premier league. He took the armband from Conor Coady on August 6, 2022. Neves will play in the FIFA World Cup alongside Cristiano Ronaldo, Bernardo Silva, and Bruno Fernandez.

Unfortunately, Neves’ and Lourenco’s family friend Diogo Jota will miss the prestigious tournament due to a calf injury. Jota played with Neves in Wolverhampton before signing with Liverpool FC in 2020.

In addition, Lourenco is also very close to Rute Cardoso, the girlfriend of Diogo Jota. Ruben Neves is the father to a daughter and two sons. His children are Margarida, Martim, and Mateo.

On August 6, 2022, Margarida celebrated her 5th birthday with her parents. At the same time, Martin turned three years old in 2022. The lovely children are often spotted cheering for their father at the Molineux Stadium.

The youngest child, Mateo, arrived in the lives of Neves and Debora on January 31, 2021. He is still very young to understand football. However, Neves dreams that two of his sons will represent the Portugal national team in the future.

According to the Daily Mail, Neves could not witness his youngest son born as he was quarantined after a match with Crystal Palace. However, following the COVID protocol, he had to see the birth of his son on his phone on the coach back after Wolves.

Ruben Neves is just a rotation option for this guy 😬 pic.twitter.com/pniSm03Qtv


The midfielder’s wife lives in Portugal, and travelling there would have required missing matches owing to the quarantine regulations, so he hasn’t been able to visit his family. So after sitting on the bench during the Crystal Palace game, Neves was instead on FaceTime with his wife, a sacrifice he has accepted and explained to WolvesTV is just a part of the job.

Neves said: “I watched it on my phone on the couch when we returned from Crystal Palace. It was not easy, to be honest; it’s really hard. It’s really hard not to be there for an amazing moment for my family.”

He continued: “Of course, I wanted to be there, but that’s the world we live in now. So we need to get used to it. We need to do everything we can to solve things because we are in big problems.”

“My wife went to Portugal because her doctor is from there. She had problems with our first baby, so we always wanted to go with the same doctor. That’s why we decided to have the baby in Portugal.”

The following weekend, Neves’ family watched him score from the penalty spot to equalize for the Wolves. Following this, the midfielder sent a message to his family with a lovely goal celebration.

More about the Portuguese midfielder and his family live can be known from his Instagram profile under the handle name @rubendsneves. He has amassed 507 thousand followers on the social media platform.